Long live Epiphany - and all its Galette varieties! 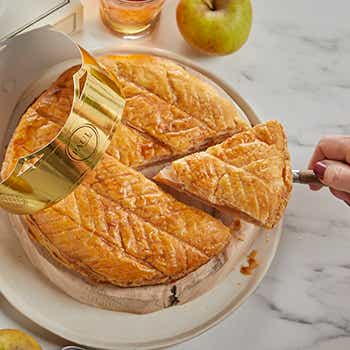 The Frangipane Galette is France’s favourite!  Yes, but . . .

The Feast of Epiphany is inseparable from the Frangipane Galette, which remains the most popular Kings’ Cake amongst almost 80% of our respondents.  Made with pure butter and pure almond, as it should be, this luscious cake is crispy on the outside, with a meltingly soft filling, and there’s no doubt whatsoever that the French LOVE Frangipane Galette.  97% of respondents said they have eaten it before, whilst 75% declared that they eat it often!

So yes, there’s a majority in favour of the Frangipane Galette, but it doesn’t reign supreme.  That’s because, as with any of our traditional festivals, the French are also especially fond of their own local recipes, which sometimes give the famous frangipane a run for its money!  So, although all the regions of France voted the Frangipane Galette their favourite, each region also put forward its own strong local contenders, all equally luscious.

In the Northern half of France, it’s the Apple Galette that appeals to 36% of respondents.  This fruity galette can be enjoyed from Normandy to the East, by way of Hauts-de-France.   It features a crisp, flaky pure-butter pastry, generously filled with lightly caramelised apples.  To accompany it, choose a good local cider – in moderation, of course!

As you travel into the Southern half of France, the pastry Galette gives way to brioche crowns, with or without candied fruits.   Whether they are called the ‘Kings’ Crown’ (preferred by 46% of inhabitants of the South West), ‘Kings’ Cake’ or ‘Kingdom’ (a specific name native to South Eastern France, according to our research), whether the candied fruits are on it, in it, or both, or whether you are happy just to flavour the cake with orange blossom, these deliciously soft specialities are often on an equal footing with the flaky pastry versions.  And the region with the most brioche-style cakes at Epiphany?  Step forward the South West, where the Kings’ Crown got the vote of almost half of those interviewed.

So, where does the region of Paris sit in all this?  If the Frangipane Galette holds down the top spot, as it does everywhere else, it’s also the only region in our survey where all the local specialities of the North and the South received equal billing, with more than 20% of the vote.  The Apple Galette from the North, the Kings’ Cake from the South West, and the Kings’ Cake with a Provençal accent – all as popular as each other with our Parisian voters!  Who said that Paris was populated by provincials?!

When we look beyond our gourmet tour, we can see that these genuinely regional differences and preferences reflect, above all, the importance of local roots and traditions, handed down through families for generations.  Because without doubt, the Galette brings together families and loved ones.

Above all, this is a moment of sharing and conviviality

When we asked the French what they like the most about Epiphany, the overwhelming majority (60% of respondents) said it was sharing the moment with family or friends.  This was almost on a par with the fantastic taste of the Galette itself – cited by 56% of those interviewed!  Next in line are respect for tradition (36%), the joy of the occasion for children (29%) and the playful aspect of the discovery of the fève or charm (a pleasure voted for by 24% of respondents) and the award of the crown (12%).

The success of the ‘galette moment’ is mainly down to family tradition, as 88% of respondents share the galette with their family.  This gourmet festival still brings all the generations together, with a few small rituals, and special attention being paid to children.  With or without a crown, it’s children who are the kings and queens of this party from the outset.  In particular, they are charged with a mission of the greatest importance: the distribution of the slices of the cake – in an impartial way!  So in 41% of cases it is the youngest child present who must distribute the slices, and in almost one in two households a child can be asked to hide under the table in order to do so!  What joy – to be able to slip under the dining table in the middle of a family meal - and be praised for it!!

More generally, this convivial event is much appreciated within several circles of acquaintances.  The galette moment sometimes gets confused with New Year celebations, and the French tend to have a proliferation of galette moments throughout the month of January, with 44% sharing at least one galette with friends, 19% with colleagues and even 11% with their neighbours.

There are so many happy and convivial moments that we may have to miss this year.  But even if it has to be a small get-together, let’s savour this little slice of happiness, so simple, yet so very greedy.  It’s more important to us now than ever.